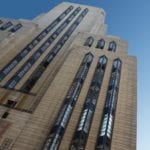 An interesting restoration and repair project which has taken place over a number of years is the iconic Mutual Building in Darling Street, Cape Town CBD. It was built as the headquarters of the South African Mutual Life Assurance Society, now the “Old Mutual” insurance and financial services company. It was completed in 1939 and opened in 1940, but before the end of the 1950s—less than 20 years later business operations were already moving to another new office at Mutual Park in Pinelands.

The building is a fine example of Art Deco architecture and design. External features include a dramatic ziggurat structure, prismoid (triangular) windows, and one of the longest carved stone friezes in the world. All the magnificent original steel windows were in bad repair. Metal Windows refurbished the Mutual Heights building’s entire exterior façade of unique steel windows. We retained all the original features including the original window handles & hardware and restored the prismoid windows and French pane panels to their original beauty.The original design of the building is attributed to Louw & Louw (Cape Town architects), Conversion to residential occupation began under the direction of Robert Silke at Louis Karol Architects.The name of the building was changed by the developers to “Mutual Heights” and is now converted into an apartment block, although some parts of the building are used commercially. The Banking Hall is now an events venue, and retail shops operate outside on the ground level. It is used often for movie shoots and now fully converted MW are now working on the interiors of the multi-use building’s apartments, using a combination of steel section and large panes of glass to form massive scale panels. These modules are repeated throughout as interior partitions.